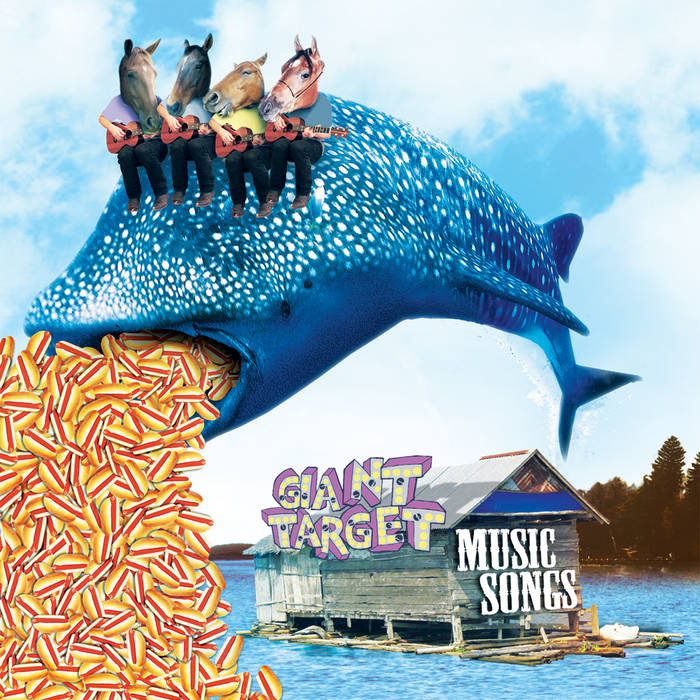 All songs written by Giant Target except Photograph by Jonathan E. Pardo

Giant Target was formed in 2009 in Cambridge, Massachusetts. The four band members met and created the band as employees of Harmonix Music Systems (creators of Guitar Hero, Rock Band, and Dance Central). The lovable music band is notable for their blending of musical styles, as well as their use of words to provide lyrics for their songs. ... more

I'm up in a private Learjet
Heading for The Netherlands, that's Holland
Don't mind the turbulence
The smiling flight attendant
Reassuring everything is safe and sound

And now I know that there's no hope for me at all
There's nothing underneath to break my fall
So goodbye
I guess this is what it feels like to die
Track Name: Tubular Food
TUBULAR FOOD

So what now, dear brain?

Well we could find another sun, and pull it very near
But it’s much too hot and would burn the rope, I fear
Maybe move off Earth, but all our stuff is here
And it’s too much stuff to take

So what now, dear brain?

We could drench the Moon in a ton of gasoline
Then we’ll strike a match, make the sun from scratch
Well it might get hot, but it also might not
And my breath begins to freeze

As the core ascends I can feel my toes again
Everything is fine, we were just in time
As my skin is warmed, I stare up at the core
And it glows like my heart in the sky
Track Name: Drink Thief
What did you order?
That's what I ordered
I'm gonna sip this, gin and tonic with lime
Then I rest it
On a surface
Now I want it back, but I don't know which one's mine

I'm not trying to be rude
I just can't keep track of booze
How can I help it when they all look the same?
When I reach for
Delicious beverage
Who's it might be doesn't even cross my brain

Sheep are not goats
Whale shark is a fish

You are of no worth.
Your life is meaningless.
The only hope for you is death.

Anybody want a peanut?

What keeps stopping you from falling from thin air?
Was it different when you weren’t stuck up there?

What keeps stopping you from falling from thin air?
Was it different when you weren’t stuck up there?

What keeps stopping you from falling from thin air?
Was it different when you weren’t stuck up there?
Track Name: Necrobaraxus
Where once we lived in peace, we now live in fear
Shrouded now in baleful clouds, where once our skies were clear
We know not how to save ourselves from this our chosen fate
If God should ever show his face, I pray he’s not too late

Blackened scales of rotten death reeking of decay
Look to the sky for salvation only to find flames
I hear him in the night atop his cursed spire
Day or night, it matters not. The demon does not tire

In his den. Home again. Rest for now.

Talons tear at boiling flesh infected with his fire
As tattered wings take flight, the dead arise from funeral pyres
The scent of those I love still lingers on his breath
Burning all I know, reanimating death

Sickness
Takes effect
And spreads disease
With necrofire
Track Name: Kiai
Oh, kiai
A ninja am I
I creep in the night
And take people’s lives

Oh, kiai
I am samurai
I’m ready to die
Or take my own life

What’s the point of view if you’d just open up your eyes?
Is there something more to life than your own paradise?
Break the mold and save the world. Just take a look outside.
I’m not blaming you, but it’s your world too.

I remember what you said to me in November right before your plane had to leave.
You said, “Darlin’, this whole world’s crumblin’ down. Children are starving. That’s why I just can’t stick around.”

What’s the point of view if you’d just open up your eyes?
Is there something more to life than your own paradise?
Break the mold and save the world. Just take a look outside.
I’m not blaming you, but it’s your world too.

Who do these kids think they are?
They’re bringing down the neighborhood, they...
Take them away, take them far, and make them stay wherever they are.

I was reading about this kid in his teens, and he was bleeding right through his t-shirt and blue jeans, and he was crying, but it wasn’t for him. His mother was dying, and she just wouldn’t wake up!

That was the Legend of Poop Dog
That was the Legend of Poop Dog
Poop Dog
Track Name: Kill People
A fuckin’ Kevlar vest won’t protect you if I bleed you to death
Cut off your limbs and record you beggin’ me to stop
Sample in songs, send me straight to the top
But there won’t be no more mutha fuckin’ music shops after my holocaust
Execute the human race one by one
Don’t need a gun I’ll use my fingernails
Tearin’ faces, tradin’ places, wouldn’t wanna be you
Strength in numbers? Fuck that! I murder two by two

I like to kill people
I murder all the time (constantly)
Kill people
And I don’t care why (incessantly)
Kill people
I got a lust for the blood of your mother; your sister father cousin and brother
Track Name: Wikipedia: Suites I & II
Brian Whitaker is a journalist for the British newspaper The Guardian from 1987 and Middle East editor from 2000-2007. He has a degree in Arabic from the University of Westminster. He was formerly a Ph.D. candidate in Middle Eastern studies, but didn’t finish the degree. He runs a web site in his spare time entitled Al-Bab.com. It is a liberal Arab site.

Ellery White was a professional football player in the NFL. He made his NFL debut in 1926 with the Los Angeles Buccaneers. He played only one season in the league.

Kiang East is one of the six districts of the Lower River Division of The Gambia.

The Lazu River is a tributary of the Mureş River in Romania.

Toomas Vilosius (born May 5, 1951) is an Estonian politician and a former Minister of Social Affairs of Estonia. He is currently the communications manager of Silja Line.

Drosera solaris is a species of sundew native to the highlands of Guyana. It is thought to be most closely related to Drosera felix and Drosera kaieteurensis.

21450 Kissel is a Main-belt Asteroid discovered on April 20, 1998 by the Lincoln Laboratory Near-Earth Asteroid Research Team at Socorro.

Di-tert-butyl ether is a tertiary ether that’s used as a solvent.

The Ford XY Falcon is a car which was produced by the Ford Motor Company in Australia between 1970 and 1972.

Owen “What the Heck” LeFranc Beck is a professional boxer from Jamaica (born in Jamaica). He had a 73-5 amateur record.
Track Name: Every Father is a Motherfucker
Mothers are a symbol of fertility and life
But that's just half of a larger equation, there's another side

They plant the seeds of family trees from which we all descend
Forgive the jokes and jeans and breath, it happens now and then

[bridge lyrics not fit to print]

Bandcamp Daily  your guide to the world of Bandcamp